On a weekend brunch, the cafe was full-house which is strange considering its whoop whoop location. Expect queues on weekend brunch peak period as they don’t take reservations. The ambience of this cafe is a bit dark and dingy in appearance, being inside a mall without outdoor sunlight, but it’s cosy and comfortable nevertheless.

My friend got the Skinny Latte ($5) which, as a coffee connoisseur, said was good; and me being a chai snob, got the Chai latte ($5.50) which I thought was really well done for Singaporean standards. No syrup in sight, it was made with the real spice. It was strong, full-bodied, milky and a substantial foam top too. 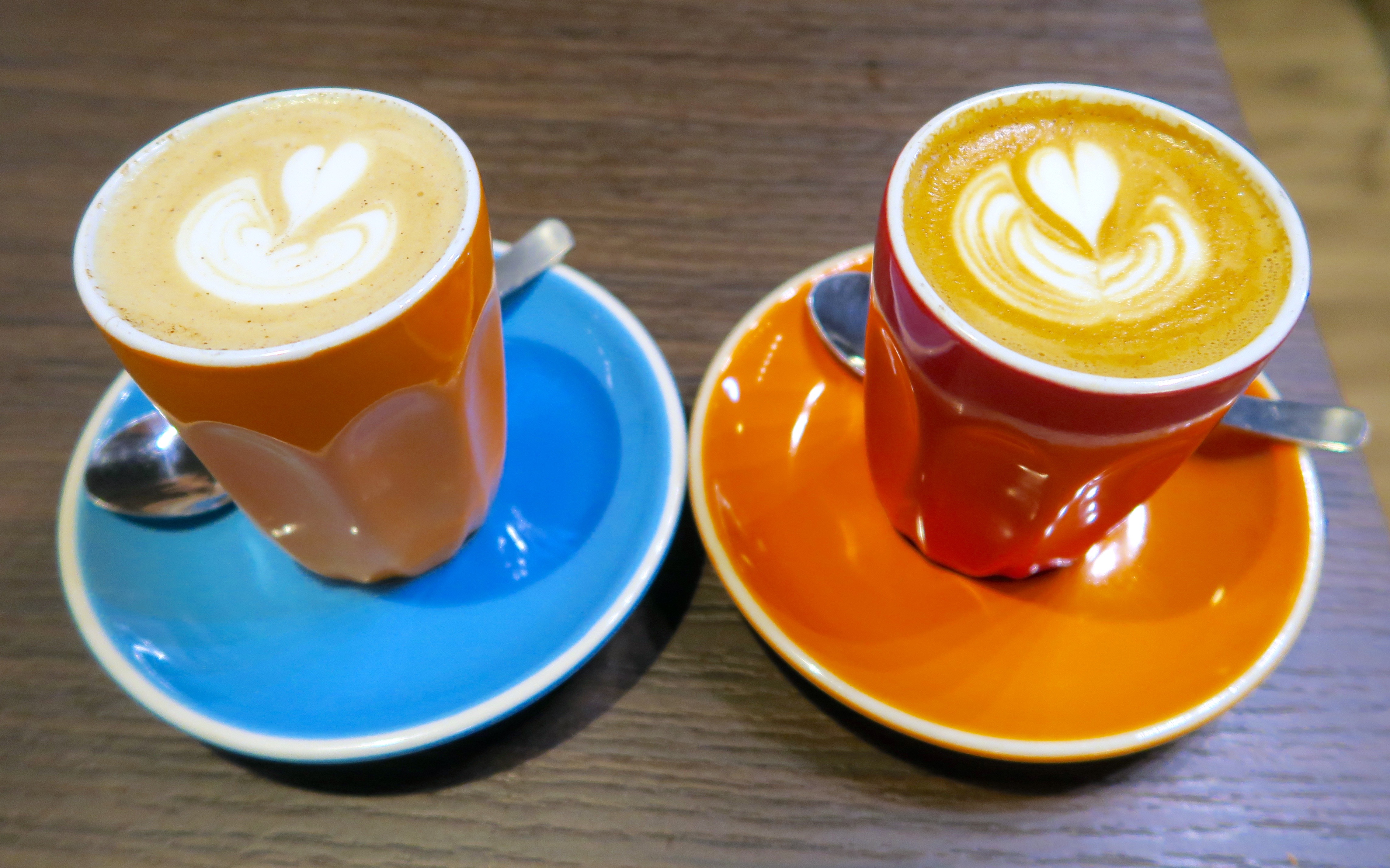 Buttermilk pancakes ($12.50) were thick and fluffy, but in my opinion not enough of a buttermilk taste. It’s a very generous serve though 🙂 The honeycomb crumbs and fruits lent a sour/crunchy contrast, and they by default serve syrup on the side which is always a plus. 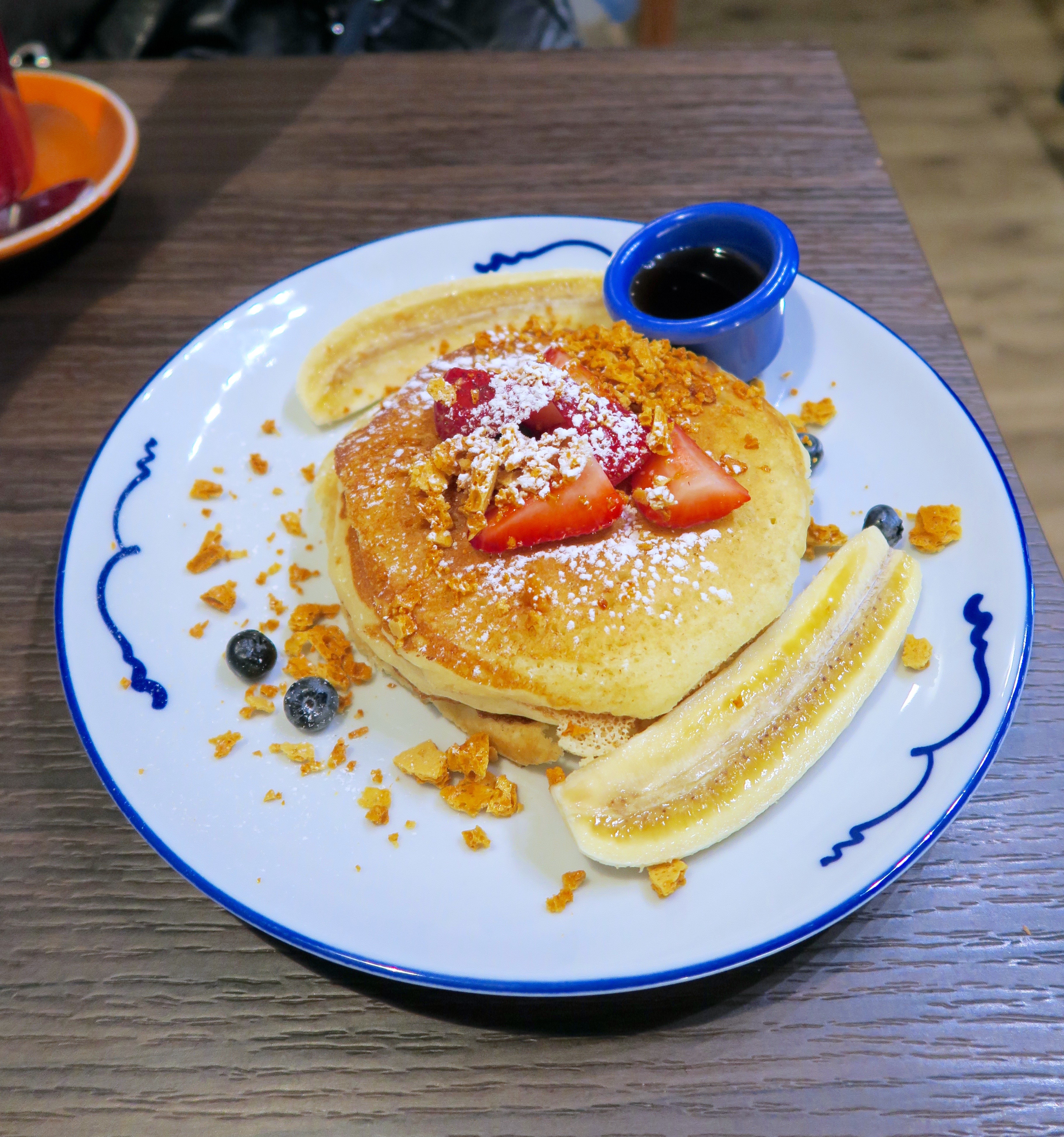 Pumpkin pancake ($18.00) – doesn’t look super appetising, but by golly it was outstanding! Hints of fresh pumpkin and pumpkin pie spice ( cinnamon, nutmeg and clove) in a soft pancake with smoked salmon that was tender and easy on the sodium, two soft poached eggs topped with a very thick and rich serving of Hollaindaise sauce. We ended up scooping most of it away but if you do get it, ask for it on the side (or maybe most Singaporeans like it that way I guess…lots of sauce in food…)! Eggs were done bouncy with a gooey half-cooked yolk. 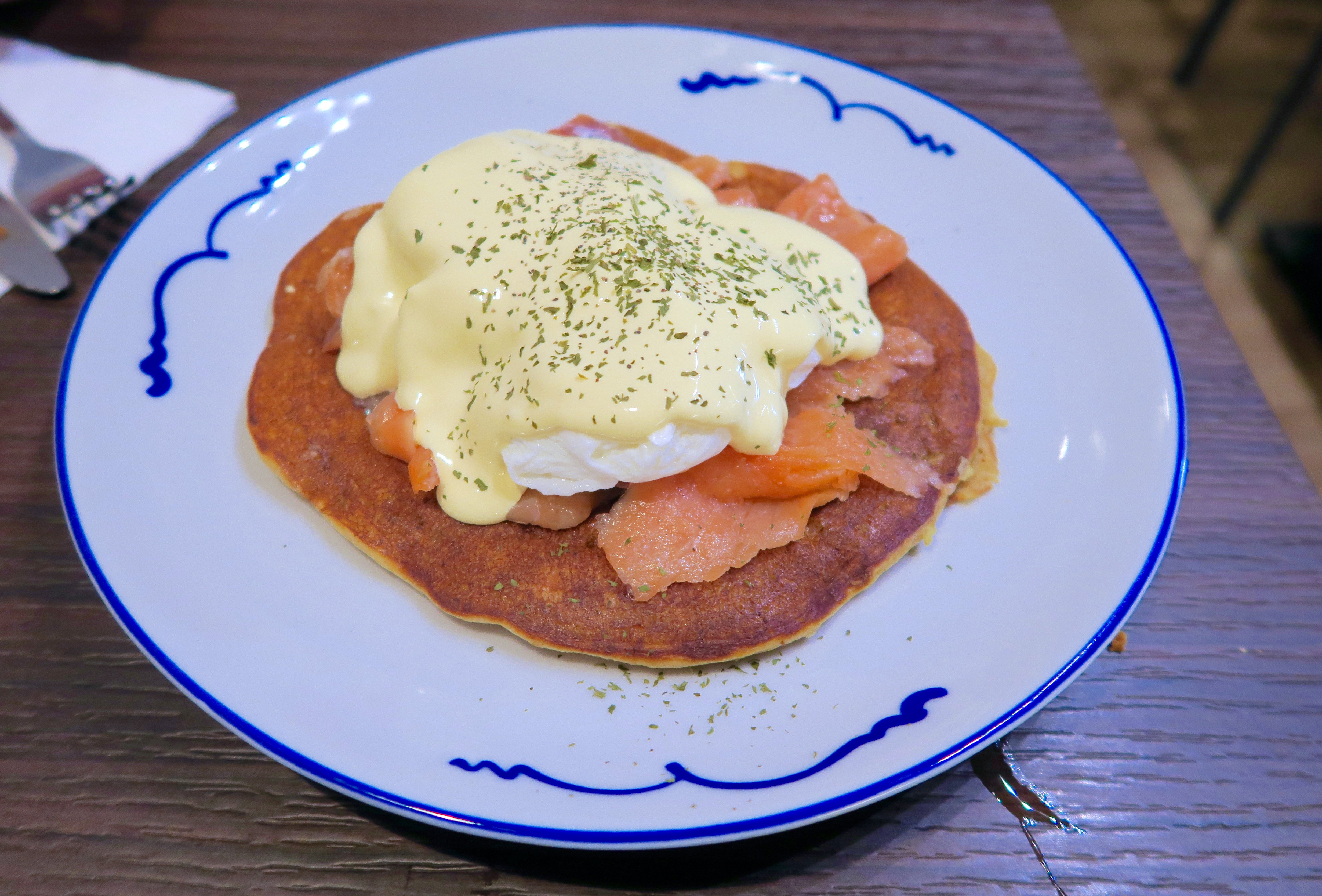 I thought the food and drinks at Group Therapy were good and understand why all the expat crowds flock here on the weekends!

Prices are nett (no service charge or GST)

They have another branch at Tanjong Pagar.

GastroSmiths has been getting rave reviews for its Asian fusion cuisine serving globally inspired hearty food (drawing from Chinese, Japanese, French, Italian, Spanish etc cuisines). It is a restaurant opened last year as the chef owner, Dillion, had shut down his original 10-seat bakery in Katong to open up this 20+ seater bistro at Marrison Hotel in Bugis. It’s an unassuming hole-in-the-wall place that you wouldn’t expect to serve such good food, but it definitely impressed. Although it was small with sparse decorations, it was thoughtful with adequate space between each table and the ones we were at even had extra chairs by the side (under the bench) to put our bags. 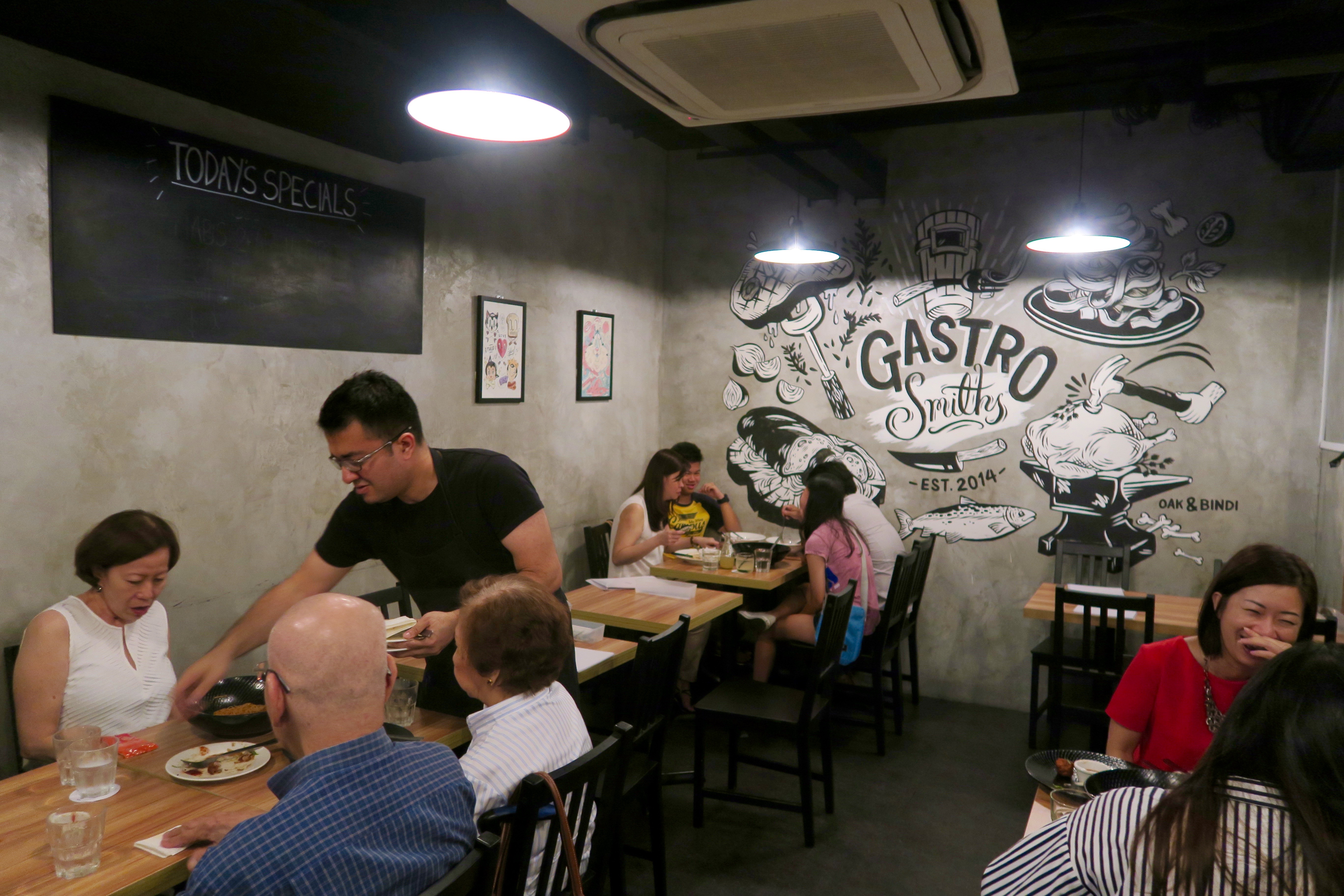 Our starter was the Scallop Ceviche ($14.50++), with Hokkaido scallop sashimi garnished with cute radish discs. It was simple yet the delightfully fresh and plump scallop paired so well with the sweet orange morsels, tang of the yuzu/olive oil sauce and koji (steamed rice with koji mould spores cultivated in; a crucial ingredient for sake) accentuated the umami taste of the scallop. 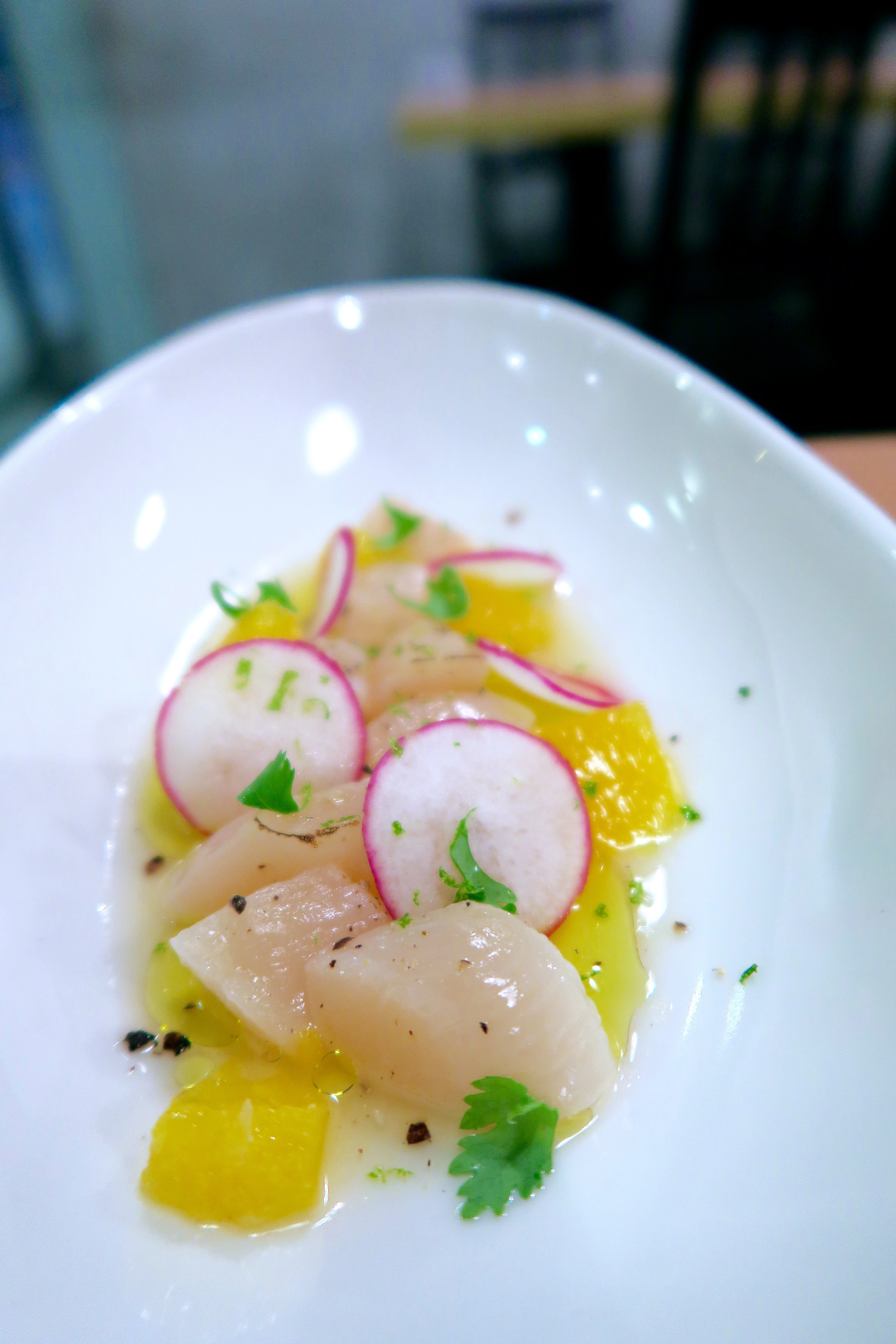 Their signature is the Hokubee Ribeye Bowl ($28.00++) with 200g grilled hokubee ribeye, Japanese rice generously seasoned with furikake and sweet vinegar, and an ultra soft sous-vide 63 degree egg (resembling the super squishy eggs served with kaya toast). Hokubee (or meltique) is a non-premium beef cut injected with canola oil/beef fat with starch to mimic the marbling of Wagyu. Hokubee definitely is no match for real wagyu, but it is tender enough to feel like it’s melting in your mouth. It had a good char encasing the perfect shade of medium pink. 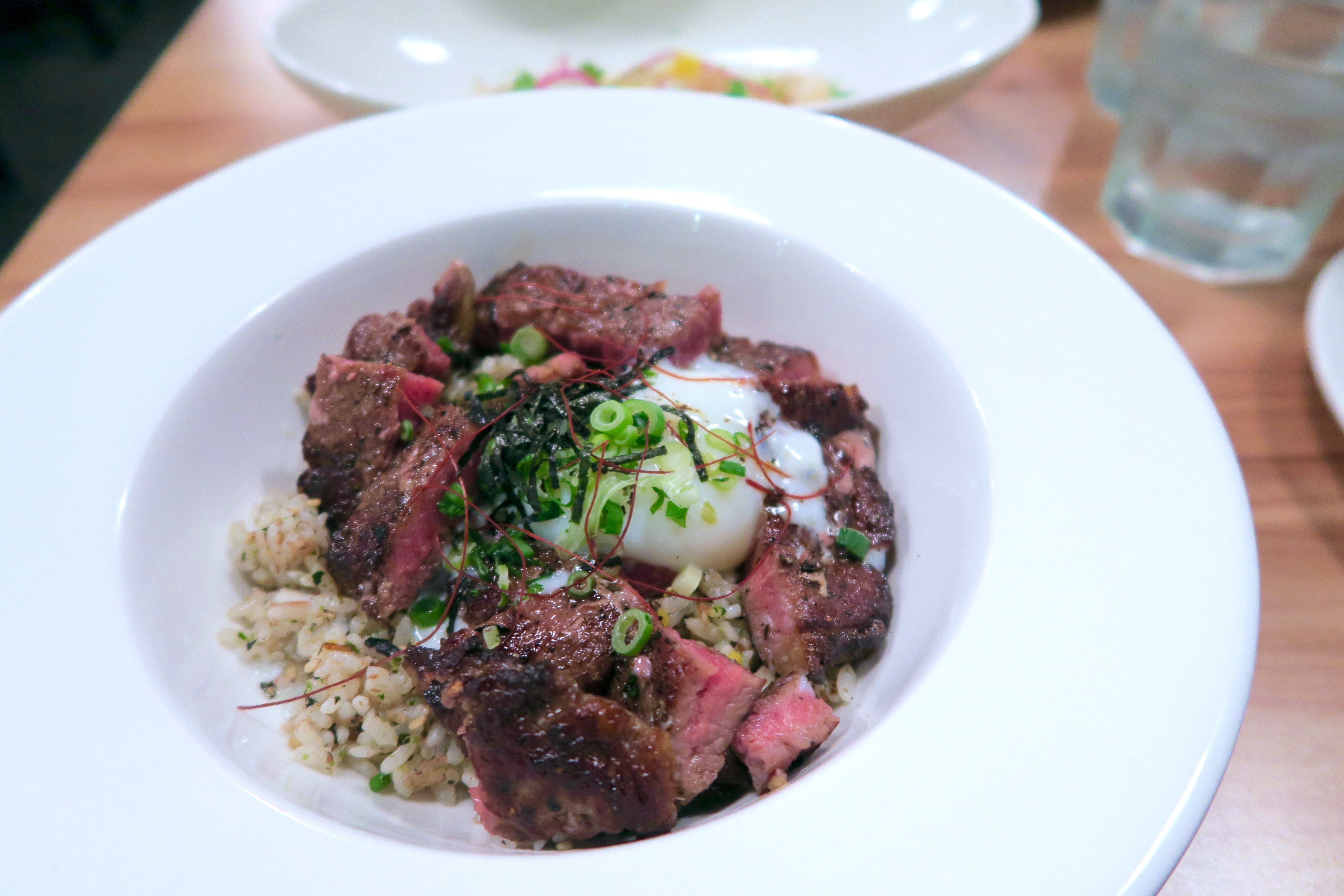 I was a bit disappointed when I realised they no longer have the famed Fried Cod Mee Sua, but I was in for something better: Fisherman’s mee sua ($25.50++) is a seafood medley with homemade scampi bisque (with hints of satay?) and mee sua. Velvety mee sua absorbed full of the seafood bisque without becoming soggy, it took in the flavours much more than pasta would. Plump juicy seared scallops, chunks of juicy crabmeat, and fresh crisp prawns, all mixed in a gloriously rich and intoxicating bisque that was absorbed into the mee sua. A shower of coriander, lashings of spring onion, grilled cherry tomatoes, and a hint of chilli padi (optional; the waiter kindly asked whether we wanted it and it was an affirmative from Mr Chilli) all completed the scene for a very enjoyable dish (the only qualm was it’s a tad salty). 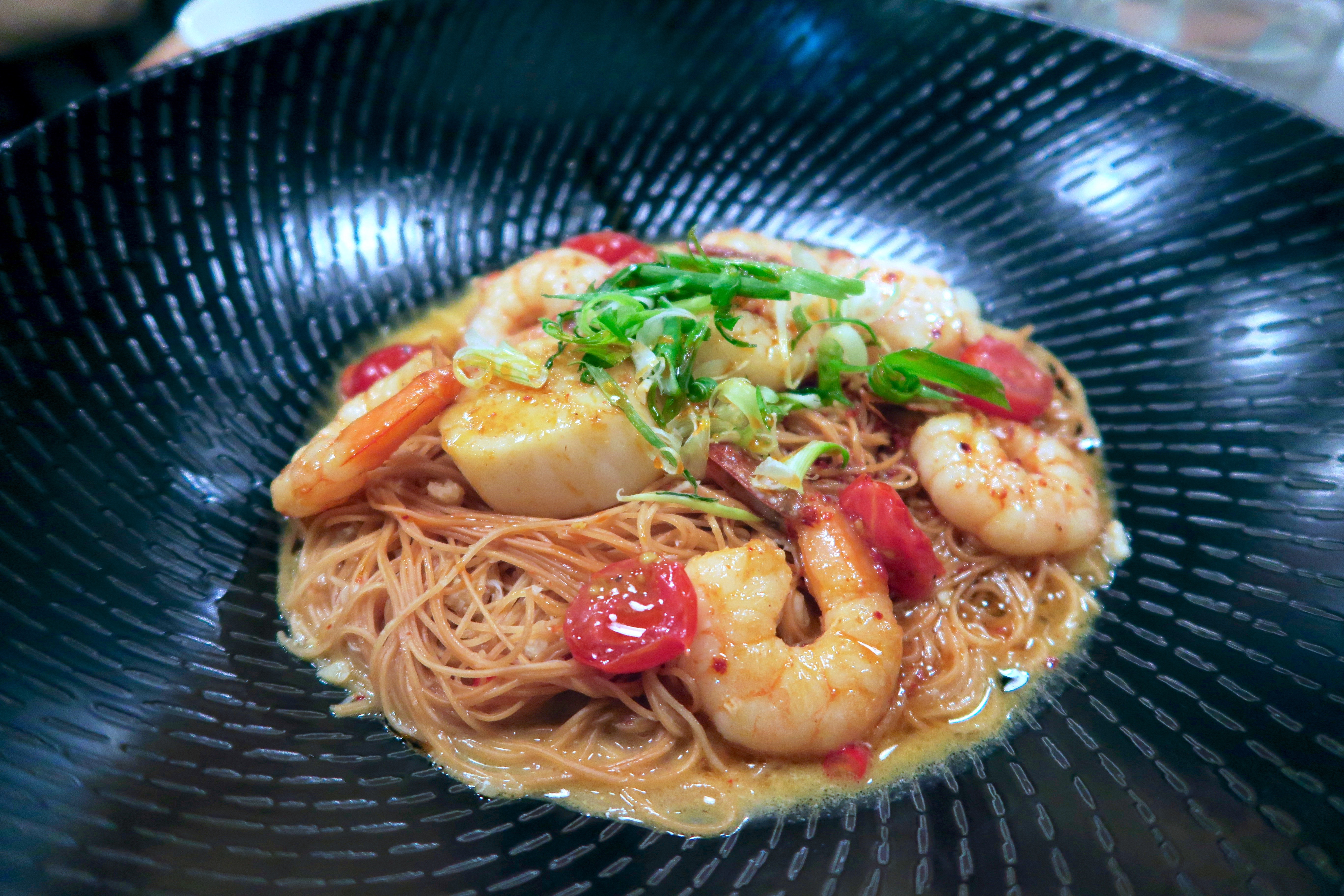 I couldn’t resist but order this gorgeous palette of magenta hues, Beet & Cheese ($14++). Patterned on the plate is the beetroot gel (which was more like beetroot puree; and it is quite strong in beetroot!), rustic beetroot sponge (yes those cute sponge-looking balls are actually beetroot flavoured), and two small cheese parfait mounds (which has a nice sticky cream cheesey quality similar to other deconstructed cheesecakes out there) dipped in a shiny beetroot fluid gel; with good-quality vanilla ice cream and crispy cookie crumbs. The beetroot taste is quite overwhelming (especially the sour pickled sliced beetroot at the centre!), but paired with the different components, it was a refreshing change to the usual berry compotes found elsewhere. I loved the luscious cheese parfait and wish they had given a bigger portion! 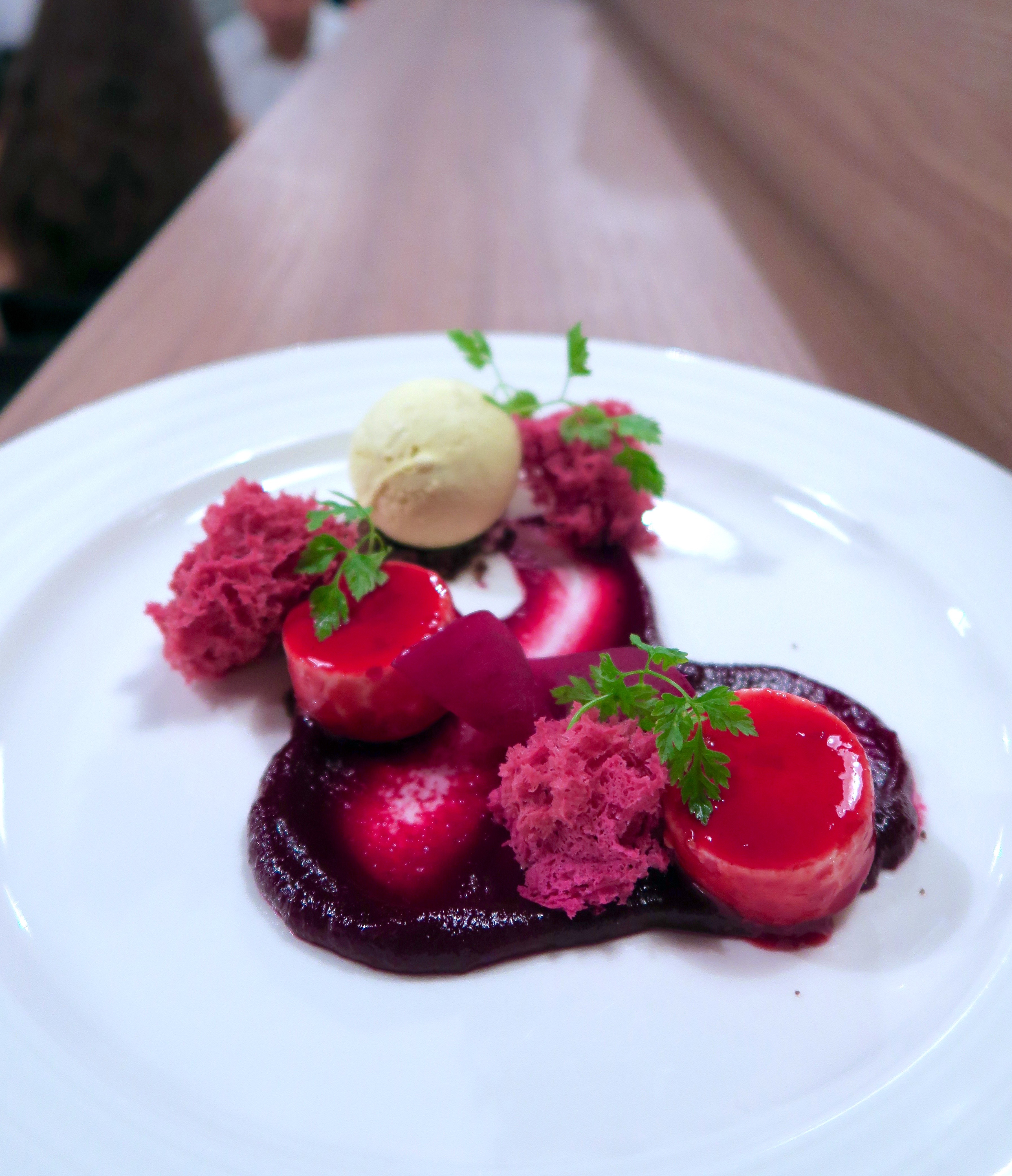 The menu has evolved and the website reports it will continue to do so as inspired by seasonal produce/latest trends. So your tastebuds will be constantly tantalised with new things and this surely was the case for me.

Service was warm, cosy and attentive. If you’re into interesting gastronomic experiences at reasonable prices, GastroSmiths is one of the favourites I’ve discovered.
Prices above not inclusive of GST and service charge.

I’m going to introduce to you my favourite cafe in Canberra, and probably one of my favourite cafes in Australia. The standards here are on par with those in the cafe capital of Melbourne, and I loved The Cupping Room so much I went there twice in the short 3 days that I was in Canberra visiting my brother, sister-in-law and baby nephew. Of course it helped that we stayed just a stone’s throw away in the ANU University House.

Situated in the heart of the Canberra CBD, The Cupping Room’s name is inspired from the cupping of coffee (not as suss as it sounds!), which is is the process coffee roasters and growers use to judge different coffees’ quality against each other without bias, and they have cupping sessions held free of charge every Wednesday and Sunday from 2.30pm (bookings essential). I didn’t get to go, but another blogger wrote about it in quite a lot of detail.

The space is a breezy little shack with foldable windows and plenty of good lighting, and the patrons are mostly uni students but there’s a fair share of Lycra-clad joggers / older adults / business people looking for good nosh. There’s a row of comfy fabric cushion sofas lined across the edge of the walls, and adequate breathing space between each table. There may be a short queue if you’re here during rush hour in the morning or lunch.

The clever thing about the menu is how they seem to more or less feature their same favourites in the menu but rotating with different ingredients on a seasonal basis (we were there in March and it was their Summer menu; it has now rotated to the Autumn menu) which takes advantage of fresh seasonal produce and reflect the overall mood of the seasons. There’s also a specials menu stapled onto the normal menu everyday which usually runs out of stock quite quickly.

On the lunch menu, my savoury-philic boyfriend got the Market fish burger ($21) – Oven baked sword fish steak, piled high with Mauritian pickle, aioli & zucchini ribbons in a brioche bun and fries on the side. The swordfish is too tough for RX’s liking, but I thought it was nicely seasoned, and taken with the zesty Mauritian relish, creamy aioli and the raw zucchini thins, it was a very satisfying brunch indeed.

Me on the other hand as a sweet-philic, was craving something lighter… so I got their amazingly good Bircher muesli ($13) with coconut milk soaked oats, chia seeds, grated pink lady apple, almonds, and passionfruit pulp. The flavours were such a great combination and the juicy crisp of the pink lady apple (my absolute favourite apple cultivar), almonds and tangy passionfruit made something as monotonous as muesli into a sensationally delightful breakfast. Surprisingly the coconut milk was not too heavy; perhaps it is a mixture of almond and coconut milk? I’ve never tasted such a delicious bircher muesli before. They were really generous with the chia seeds too; it was proportionally more than the oats!

Escabeche ($19) – one of the specials on the menu (they seem to rotate weekly with seasonal produce, so while it’s still on the autumn menu, it may not be kingfish anymore). Cured kingfish with heirloom beets, baby carrots, radish, jalapeños, boiled egg & anchovy aioli  and gluten free bread (just wanted to try Deeks quinoa bread… it’s originally supposed to be sourdough toast. By the way they do charge extra for the GF bread; I think $1?) – RX’s favourite meal in Australia. Not to be confused with ceviche (raw fish), escabeche is a Meditarranena/Latin American dish of poached fish marinated in an acidic mixture served cold. The dish really piqued the palate with generous blocks of mellow and oh-so-soft poached kingfish, which had only a very mild vinegar taste. I don’t like cured food but this was really well done. The fresh heirloom veggies were piled in a beautiful fresh stack, and the jalapenos provided the hot kick to oomph the dish up. The soft boiled egg was seasoned with salt and pepper and provided a yolky creamy goodness to dip the nicely toasted bread.

Beautiful food…Hotcakes ($18) – Figs, strawberries, pomegranate, housemade honeycomb, crème fraîche, citrus syrup and berry gel ricotta hotcakes (I saw on their Facebook they have it with agave syrup; as I have read some people say it’s not sweet enough for them!). This is THE BOMB. Yep. Beats any other hotcake I’ve had in my life. I loved the generous heaping of fruits and despite its looks, it wasn’t too sweet. The creme fraiche, berries and pomegranate had a refreshing and sour touch while the crunchy honeycomb provided the sweetness needed to balance it off. The ricotta hotcakes were thick, fluffy and substantial; it’s really the good homemade stuff.

Real chai – infused with bonsoy ($5). The chai tea leaves came in a strainer and I could pour the honey-infused soymilk through. I asked for less sweet, but they advised me it was already pre-prepared; but luckily it wasn’t too sweet at all. Chai tea tastes so much more gingery and fragrant when it comes from the real thing and not syrup.

If you’re looking for wholesome, beautiful, and good food, I think you’ll know where to head if you’re in the capital of Australia.

Image on header courtesy of freedigitalphotos.net